Neu5Gc (N-glycolylneuraminic acid) is a monosaccharide (sugar) that sits on the outside of cells and helps the immune system to recognize “self” cells from “foreign” cell such as bacteria or other invaders that may be harmful.  Humans are unique among mammals because they cannot produce Neu5Gc, we produce a genetic variant, Neu5Ac. When we eat other mammals such as cattle, sheep, or pigs their Neu5Gc becomes incorporated into our cells and sits on them. When our immune system sees Neu5GC it is recognized as foreign and antibodies are made to attack and destroy it. The attack may also destroy the underling cell. This attack by our immune system cause inflammation and may promote cancer cell growth.

In 2003 researchers who wanted to know more about Neu5Gc drank purified pork Neu5Gc and found that most of it was eliminated but a small amount was retained and incorporated into their cells. The highest levels were seen about 2 days after intake and then the levels started to drop. They were back to baseline after about 8 days. This was because most of the cells affected were the rapidly dividing cells with high turnover rates that line our hollow organs. Hollow organs include blood vessels, stomach, intestines and the bladder. High Neu5Gc levels were associated with high levels of antibodies to Neu5Gc and inflammation. Every meal of meat or dairy gives you a dose of Neu5Gc and inflammation. If you are eating these foods daily or worse several times a day the chronic inflammation may lead to auto-immune disease and permanent damage to organs.

The good news is that if when we stop eating meat and dairy we can get rid of the Neu5Gc that attaches to normal cells. The bad new is that cancer cells are rapidly dividing also but they don’t die and Neu5Gc accumulates in them. Inflammation causes increased blood flow to inflamed areas. The inflammation caused by Neu5Gc may increase blood supply to cancer cell to help them to grow.

Neu5Gc is not found in birds or reptiles, chickens also mount an immune response and make antibodies to Neu5gc that can be found in their tissues. 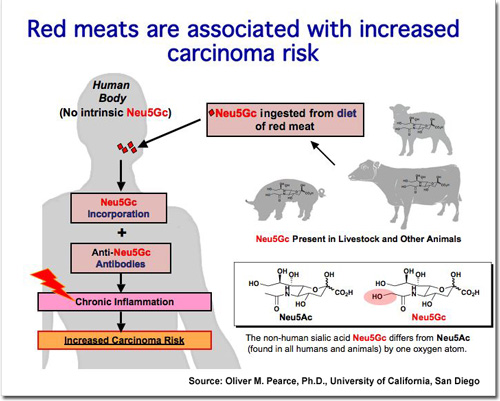