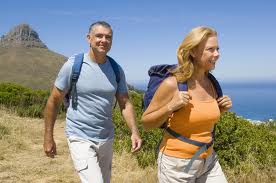 The American College of Sports Medicine (ACSM) estimates that regular exercise at the correct intensity can:¨

The Nurses’ Health Study found that the likelihood of living past the age of 70 in general good physical and mental health was nearly doubled for those who did the most physical activity compared to those who were sedentary.  People who exercised were also less likely to have major chronic conditions such as cancer, cardiovascular and lung disease, kidney failure, diabetes, and Parkinson’s disease.

It’s not just chronic/lifestyle diseases that can prevented by exercise, people who exercise regularly also report fewer colds and other acute upper respiratory tract infections compared to their sedentary peers. Exercise improves immune system function; brisk walking causes a modest surge of neutrophils and natural killer cells, and improves T lymphocyte function.  Walkers in one study had half the number of sick days with cold symptoms compared to the sedentary 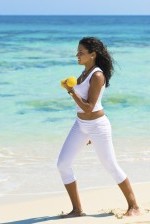 participants.  Near-daily moderate exercise was associated with a 25-50% reduction in sick days that exceeds levels reported for most medications and supplements.

A recent survey conducted by ACSM found that only 4 out of 10 physicians (41%) discussed the importance of exercise with their patients.  Those who did recommend exercise did not always offer advice or specific suggestions on the best ways to be physically active.  ACSM also found that 65% of patients would be more interested in exercising to stay healthy if advised by their doctor and given additional resources

From the 2008 Physical Activity Guidelines for Americans Office of Disease Prevention & Health Promotion in the U.S. Department of Health and Human Services.

Pregnant women who currently exercise should continue with their regular activities. Moderate aerobic activity at least 30 minutes/day x 5 days is recommended. Women who regularly engage in vigorous-intensity aerobic activity or high amounts of activity can continue their activity as long as the pregnancy is well monitored and there are no complications. Physical activity during pregnancy should always be discussed with a health care provider.

People with common cold symptoms can safely continue with moderate physical activity, but should rest until symptoms resolve before resuming strenuous activity. If you are in otherwise good health, mild-to-moderate activity with the common cold is not harmful. In studies where nasal sprays of a rhinovirus were used to infect subjects, exercise did not make symptoms worse or impair performance. If you have symptoms of fever, extreme tiredness, muscle aches, and swollen lymph glands, then you should rest for 2-4 weeks before resuming strenuous physical activity.

You Still Have to Eat a Plant-Based Diet

While exercise is an extremely important lifestyle intervention, and it is often the only one that healthcare professionals recommend, it should NOT be your only intervention. Exercise alone will not lead to significant weight loss and it will not unclog blocked arteries.  Jim Fixx, the author of “The complete Book of Running” is the classic example of this. Fixx was an apparent health success story; at the age of 35 he weighed 240 pounds and smoked 2 packs of cigarettes/day.  He started running; lost 60 pounds on a high protein-low carbohydrate diet; quit smoking and became a national fitness expert.  In 1984, at the age of 52 he  had a massive heart attack after running on a tree-shaded road in Vermont.  His autopsy showed that all three of the arteries feeding his heart had some degree of blockage. I was shocked by this because I became interested in fitness and running in 1978 after reading his book. His death was a wake-up call for me to re-evaluate my eating habits but unfortunately this tragic event had little impact on fitness nutrition advice. Doctors dismissed it as “genetics” and to this day health and fitness experts  continue to recommend artery-damaging, “high-protein” diet-low carbohydrate diets to unsuspecting people. Optimum health starts with a plant-based diet along with regular physical activity such as a walking or running.