Is a Vegetarian Diet the New Hand-washing Disease Prevention?

The authors concluded that eliminating these foods would prevent these diseases and save lives, but asking people to stop eating meat and other animal products would be “extreme.”

This got me thinking about the introduction of another life-saving behavior change that was once considered to be “extreme” – hand washing and cleanliness.

In the 1800s almost all surgeries were complicated by infections and over 50 percent resulted in death. Hospitals were unsanitary places that were often called “death houses.”

The most common cause of death for women of childbearing age was puerperal sepsis, an infection contracted by women during childbirth that spread throughout their bodies and was often fatal because there were no antibiotics. Most women delivered babies at home attended by midwives or doctors. Maternity wards were primarily for the poor who got free care in exchange for allowing doctors and midwives in training to “practice” on them.

In 1847 the maternity clinic in Vienna had two wards, one for training doctors and the other for training midwives. The maternal death rate on the doctor’s side was over twice as high as the midwives. The wards admitted on alternate days and women begged to go to the midwives, some even preferred to deliver on the streets. 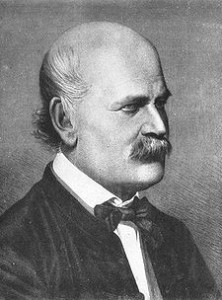 Semmelweis discovered that the incidence of puerperal fever could be drastically cut by the use of hand disinfection in obstetrical clinics.[2] Puerperal fever was common in mid-19th-century hospitals and often fatal, with mortality at 10 to 35 percent. (Wikipedia Commons)

The Chief Resident at the time, Ignaz Semmelweis thought it was odd that women who delivered at home or in the streets rarely developed these infections. He was puzzled by this until one of his friends accidentally stuck himself with a scalpel during an autopsy and died of an infection similar to the women on the ward.

The doctors performed autopsies bare-handed each morning before going to their maternity ward to examine patients and deliver babies without washing their hands or changing their clothes. The midwives did not do autopsies, so he thought maybe the deaths were caused by “cadaverous particles” from the dead bodies.

He ordered all the junior doctors and students to wash their hands in a chlorinated lime solution before starting ward work, and before each vaginal examination. The death rate dropped dramatically by 90%. This finding should have revolutionized obstetrics and surgery, but instead it was greeted with skepticism, ridiculed for being “extreme” and ignored by most doctors of the day.

Doctors did not adopt hand washing because cleanliness conflicted with existing medical beliefs about the causes of disease, and the image that doctors had of themselves as saviors rather than disease carriers. Semmelweis became frustrated at the slow pace of change and began writing to the heads of obstetrics departments calling them “irresponsible murderers.”

He lost his position and eventually died in a mental hospital. At the time, doctors were using leaches and bloodletting to release “bad humors” and the common belief was that disease was unique to each individual so cleanliness could not make a difference.

This is similar to our current beliefs that our genes cause disease and there is or should be a medication to treat each disease so what we eat does not make a difference. In fact, less than 5 percent of modern diseases are caused by genes alone.

Recent scientific evidence; shows that eating mostly whole plant foods and eliminating animal products can actually change the way that our genes express themselves. The problem is that most doctors, even those interested in prevention, have unconscious beliefs about food and disease that conflict with the scientific evidence.
Eating whole plant foods compared to a heavy meat diet might just prevent a heart attack.

Most doctors ignore or reject evidence about the effects of a plant-based diet in the treatment of disease and the information never gets to patients who should be advised to make meaningful behaviors changes.

History is repeating itself with the same deadly consequences; millions of people are dying from chronic diseases that could be prevented by simple behavior changes such as a adopting a mostly plant-based diet.

On the bright side there is growing interest in lifestyle medicine among the medical profession. Change is slow, but it does come; hand washing is universally recognized as an important preventive measure and all health care providers use gloves to perform procedures now.

The scientific evidence that supports eating whole plant foods and eliminating animal products is growing stronger and health conscious members of the public are demanding better advice from their health care providers. Hopefully this demand will increase consciousness among health care professionals, and health behaviors that are considered “extreme” will be generally accepted and unnecessary suffering and death can be prevented.